End of Cold War (facts only, no emotions)

This is English translation of the original article written in Russian

A long discussion of the route «Cold War» has caused a lot of controversy, often very emotional, while somehow forgetting the essence of the issue.
Originally, the point we raised was that it is not accepted to rap bolt (bolt on abseil) routes on Morcheka. (Well, in general, is it normal practice for alpine style climbing). Routes must be climbed in ground-up style, while making maximum use of the existing features of rock and minimum use of bolts. These rules were followed from the beginning of development on Morcheka in 70s of the 20th century. In those early years technical possibilities for the new routes were poorer, but still all the classic lines were climbed in the late 70s — mid 80s. Subsequently, the newer routes were climbed either on unoccupied sides of the wall or in free «corridors» between existing routes. The «ground-up» only rule was always respected. You can disagree with it, or argue, but it is our history and tradition. No less, no more.
Incident we had now — people who were not involved in the past history of Morcheka development and in general, who are not interested in it, decided to setup «their line» on the wall. It is enough to see a photo with the route topos to understand that there is no space left on the wall for the new independent route. But they really wanted …. And the new rappel bolted route was made.
Let’s summarise what did they do:
First picth: goes along the route called «The Center». No changes here.
Second pitch: via «black band» — this pitch is an old pitch climbed by «Fantik» (one of Morcheka pioneers), hence it cannot be considered as the «new pitch». Fantik placed two bolts on that pitch. Nefedov and Wright have chopped it and placed three bolts instead of two. (YK — Later Nefedov tried but failed to chop two of these bolts leaving them with no hangers and spoiled threads)

Second pith of Fantik — both or his bolts chopped 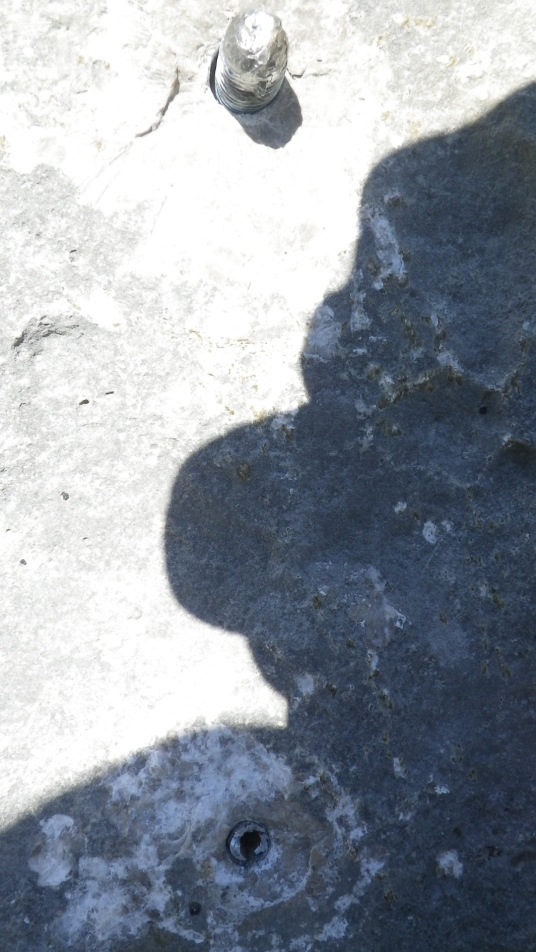 Chopped bolt of Fantik on the 2nd pitch. Next to it — new bolt. Nefedov has removed hanger and left bare bolt with spoiled thread. We have counted 5 such occasions further on the wall

In the top of the black band they placed bolted belay next to good natural features. What can we say — if you found the bolts of the other party they you are not on the first climb, then you should keep the style of the real first ascentionist. Later Nefedov has removed hangers from his bolts and hammered threads down. But Fantik’s bolts were already chopped…
Third pitch: they continued Fantic’s line for about 15 meters till the point where Fantik had turned right to join «The Center» route. Nefedov and Cedar continued up and faced 12m long slab — they placed 3 bolts, with 2 meters distance between them. These 12 meters so far is the the only part which can be called «First climb». (YK: there are natural cracks to the right and left of the slab — SkyWay and Center routes respectively. Slab can be climbed by placing natural protection in any of them)

Forth pitch: via SkyWay route for 40 meter (YK -of the 60 meters long pitch with 13 bolts). First ascentionists Kruglov and Lyashenko had placed 7 bolts on that part of the pitch. Nefedov and Cedar have rebolted 6 of them and added five more bolts (two of them were placed for (belay). YK: belay right in the moddle of the SkyWay pitch — in the place where they turned left of it. Initial talk between me and Cedar was about them to remove this belay from SkyWay pitch). And this retrobolting is obvious spoiling of one of the crux pitches of SkyWay.

By te way, bolts placed by FA of SkyWay are still in good condition, I think it wasn’t necessary to rebolt them.

Retrobolting: Red circle — one of the bolts added on R3-R4 of SkyWay.There were five added bolts on that pitch. All added bolts were removed. Rebolted placements were left in place

Fifth pitch: traverse of SkyWay to the left, then up the wall. This pitch would’ve been unclimbable without preliminary placed bolts on abseil (rappel). About 20 meters. Ten bolts placed. Belay is on the left part of the same ledge where R4 of SkyWay is placed. It is interesting, from belay R4 of SkyWay it is easy to traverse IV grade rock to get here.

Where is logic? 10 bolts placed on pitch CW4-CW5. It is almost walk to get to CW5 from R5 of SkyWay

Sixth pitch: up the slab, five bolts, one peg, then after 15 meters joining «Classica» — one of the oldest routes on Morcheka, which is climbed with natural protection. In the middle of pitch R6-R7 of «Classica» they placed two-bolt belay which absolutely extra for this place with features for natural protection.

In the middle of pitch R6-R7 of «Classica» they placed two-bolt belay !

Seventh pitch: up-left, then up the wall — 25 «own» meters, 4 bolts, then joining the ledge with SkyWay belay.
Pitch 8: overhanging wall with rich features for natural protection, about 40 meters, one bolt and one peg. Two-bolt belay is placed in one meter below the top. Why? It is more convenient to belay staying on the top.

Last belay is below the exit …

Summary: 112 of «own» meters, including ledges and places unclimbable without preliminary placements of bolts. Again, let me repeat, in rappel bolted style. The following routes spoiled — Fantik’s pitch of «Center» route via black band., forth pitch of SkyWay, seventh pitch of «Classica». 36 bolts were placed — this number excludes bolts placed for belays. 112/36 — about 3 meters per bolt. Most interesting pitches are the pitches of other routes included into the «first climb». By the way there are enough 100 meter high rocks in Crimea where it would’ve been possible to make totally independent route using groun-up or rap bolted style. These are facts.
At present all «Cold War» bolts were removed completely (YK: except 6 rebolted ones on R3-R4 of Skyway and bolt belay on R3 of Skyway) I don’t think climbing community lost anything here.
P.S. Local ethics on climbing Crimean big walls (including Morcheka) were formulated in writing at least two times: in guidebook «Morcheka — forgotten mountain» by Yuri Kruglov; and by Head of the Rock committee of Ukraine Mikhail Sitnik. Anyone who wanted to hear it — heard it. Crimea is a small peninsula, the number of big walls in limited. We need to be treat them with care! We consider Crimean walls as mountains. We have no other mountains. Maybe there are lot of Morcheka mountains in USA or Russia. If so then do it there although we would still feel sorry for these mountains.

To get more info on this topic please read the article «Morcheka. Restoration works» by Alexey Shelhakov